Laudanum: All the rage for over 200 years

Laudanum, a mixture of opium and alcohol, features prominently towards the end of my novel A Noble Cunning. My heroine Bethan Glentaggart, Countess of Clarencefield, needs a substance that will put a dangerous man to sleep at a critical moment in her plot to save her husband’s life. So what was this mysterious liquid called laudanum? 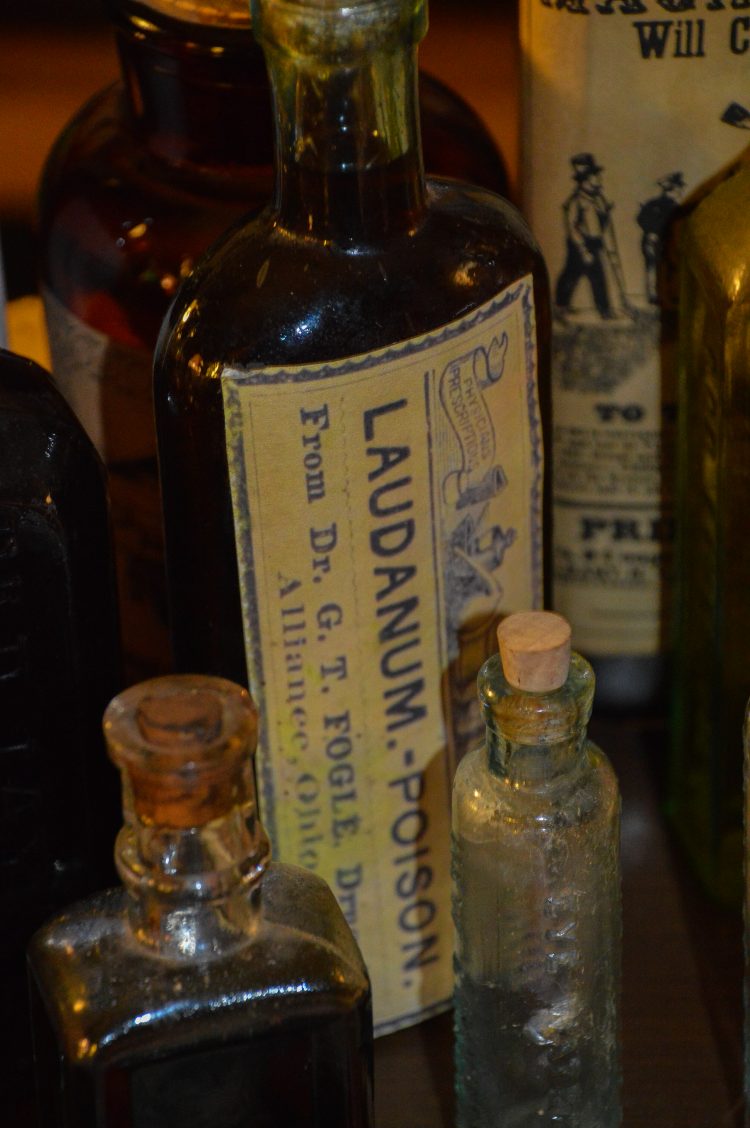 During the 1660s, a British physician Thomas Sydenham, once called “the Shakespeare of medicine,” developed a proprietary combination of opium and alcohol that consisted of two ounces of opium and one ounce of saffron dissolved in a pint of sherry, mixed with small amounts of “bruised” cinnamon and cloves. Sydenham created laudanum because he knew that offering an opiate pill would frighten some patients but laudanum could be introduced in beverages without a patient’s knowledge.

Syndenham was a great believer in the medical value of opium as a remedy for insomnia, pain and diarrhea, but thought it had many other valuable uses as well. He was aware of the risk of dependence, however, and prescribed it sparingly. As early as the mid-1700s, George Young, a surgeon in Edinburgh, published a treatise that declared, “opium is a poison by which great numbers are daily destroyed.” Undoubtedly, Young had seen the harmful effects of opium addiction in his own practice and was attempting to counter physicians who were recommending laudanum for everything from coughs to teething pains in children.

Eventually the term “laudanum” was applied to any mixture of opium and alcohol. The substance is known for the extreme bitterness of its taste, which means that the characters in A Noble Cunning have to find a way to disguise the taste by hiding the laudanum in a beverage with a strong taste of its own.

Laudanum was the drug of choice used by Thomas DeQuincey, author of the notorious Confessions of an English Opium-Eater, whom The New Yorker , in a 2016 article,  anointed “the man who invented the drug memoir.” Samuel Taylor Coleridge, author of “Kubla Khan” and “The Rime of the Ancient Mariner,” was also known as a long-term user of laudanum. He claimed that “Kubla Khan” was inspired by a drug-induced dream, but others have suggested that his excessive imbibing of claret wine was just as likely to have been the source of his “inspiration.”

It is less well-known that other characters, who did not partake in the fabled excesses of the Romantic Poets, used laudanum. Who could be more respectable than George Washington, yet Washington used laudanum to ease the pain caused by his ill-fitting false teeth, made of human and animal teeth and carved ivory.

Beloved author of Little Women, Louisa May Alcott, nursed soldiers wounded in the Civil War until she collapsed with a double dose of typhoid and pneumonia. The aftereffects of the typhoid were treated with a mercury-based concoction called calomel, which she believed caused the numerous ailments that afflicted her for the rest of her life—headaches, vertigo, skin rashes, rheumatism and intestinal pain. She used laudanum to dull her persistent discomfort.

Elizabeth Barrett Browning, the invalid poet who famously abandoned her tyrannical father and a dozen or so brothers and sisters to elope with Robert Browning, was taking  40 drops of laudanum a day when she began corresponding with her future husband. At one point she wrote, “Opium—opium—night after night!” She romanticized her addiction, exalting the ability it gave her to engage in a frenzy of writing, and wishing for a solo existence in which she could indulge “in an hourly succession of poetical paragraphs and morphine draughts.” Robert Browning helped her reduce or end her use of laudanum which enabled her to have a child at last after three miscarriages.

The crusading nurse Florence Nightingale, who won fame treating British soldiers during the Crimean War, once said, “I could not have got through the day without this wonderful little pick-me-up,” by which she meant laudanum. Charles Dickens used laudanum to help him sleep and for pain in his legs.

Some who indulged in laudanum could continue to function usefully. Others, however, progressed from what might have begun as medicinal use to hopeless addiction. Branwell Brontë and Elizabeth Siddal, muse and wife of Dante Gabriel Rossetti, both died of laudanum addiction.

Laudanum appears like a recurrent specter in Victorian literature. Victor Frankenstein doses himself with laudanum in Mary Shelley’s novel so that he can sleep after his monster kills his friend Henry Clerval. In Dracula, the count puts Lucy’s maids to sleep by putting laudanum in their wine. Cassy in Uncle Tom’s Cabin, kills a child with laudanum so that he will not grow up a slave. In George Eliot’s masterpiece  Middlemarch, one character allows another to die of a combination of laudanum and alcohol.

It is understandable that, with the wealth of painful diseases, fevers, and infections, for which there were as yet no effective treatments in the 18th and 19th centuries, any sufferer might be drawn to a substance that reliably relieved pain. According to Mike Jay in Emperors of Dreams: Drugs in the Nineteenth Century, until the mid-19th century, opiates were sold by “barbers, confectioners, ironmongers, stationers, tobacconists, wine merchants,” and other miscellaneous suppliers such as grocers and pubs. Many patent medicines contained laudanum. A prescription was not required until the mid-19th century.

Bethan Glentaggart’s friends in A Noble Cunning are innocents who know very little about the drug they use to ensure that a malevolent guard at the Tower of London will not disrupt their plans. Even so, Bethan makes sure that her friends understand that she does not intend to kill the guard. She is no “Lady Macbeth,” she says. She just wants to give him enough of this strange concoction to get him out of the way for a time. But making use of a powerful and little-understood poison is perhaps riskier than they realize.

Previous Post
Queen Anne, last of the Stuarts, told a tale about a warming pan and changed the course of history
Read More
Next Post
Famous Prisoners in the Tower of London: Thomas Cranmer
Read More
Subscribe
0 Comments
Inline Feedbacks
View all comments