Many of you have seen or heard of the 2018 black comedy film The Favorite, nominated for 10 Academy awards, about the reign of Queen Anne (1702-14), the last of the Stuart monarchs, and wondered whether any of the more ridiculous and salacious details had any basis in fact. Did Queen Anne really keep 17 rabbits in her private quarters who represented her 17 children who all died? Did Anne’s favorites Sarah Churchill and Abigail Masham really fight bitterly for the queen’s favors and try to enhance their chances by having sex with her?  (Why shouldn’t a queen have sexual favorites after all? The kings who preceded her certainly did!) 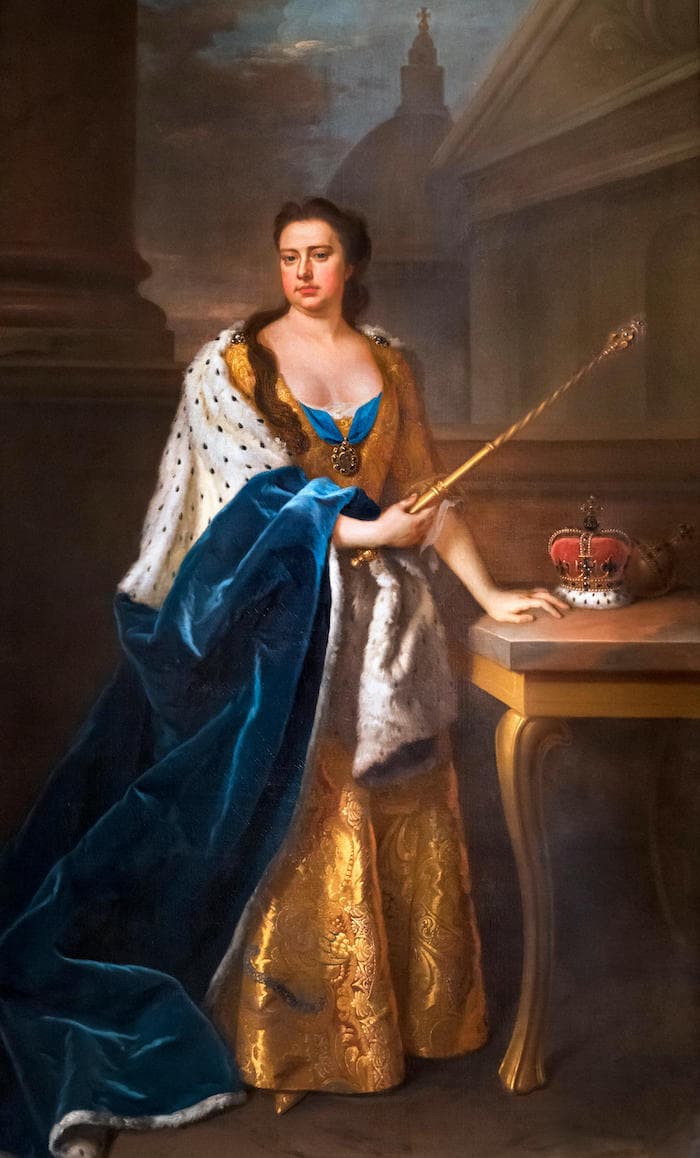 Poor Anne. Although in her youth she was a princess and daughter of the heir to the British throne, she does not appear to have been considered a great prize on the royal European marriage market. Somewhat squinty and pudgy, she lacked the charm of her older, taller and more graceful sister Mary.

Anne was finally matched with Prince George of Denmark, who was kind and faithful to her, but was not equipped to make much of an impression in the world. King Charles II once said of the prince, “I have tried him drunk and I have tried him sober, and there is nothing in him.”

Anne was much more passionate in her relationship with her longtime bosom buddy Sarah Churchill. In one letter to Sarah, Anne wrote, “I wish I may never see the face of Heaven if ever I consent to part with you.” Sarah was beautiful, witty, intelligent and extremely domineering, and used her closeness to Anne to advance her own and her husband’s positions at court. When Anne finally became queen in 1702, she elevated Sarah’s husband John Churchill, by then a great military hero, to the position of first Duke of Marlborough.

In the end, Sarah Churchill overreached after a series of escalating political and personal quarrels with Anne when she ordered the queen to “be quiet” in public. Those who observed this scene must have wondered which woman was the queen and which the courtier! In 1711, the queen forced Sarah to resign all of her offices and leave the court.

Anne had come to prefer the quieter, less demanding company of Abigail Masham, Lady of the Bedchamber and cousin to Sarah. It was the banished and highly vindictive Sarah Churchill who helped to circulate the rumor that Anne and Abigail were involved in a sexual relationship through a scandalous poem probably written by propagandist Arthur Mainwaring which ends, “Her secretary she was not/Because she could not write/But had the conduct and the care/of some dark deeds at night.”

Sadly for those of us who enjoy the juicy bits of history, historians have generally concluded that it is highly unlikely that the queen was in a physical relationship with either woman. Anne and her dull husband were devoted to each other with a monogamous commitment that was rare among the nobility at the time. She was also almost continuously pregnant during their marriage and slept in his bed every night. After he died, her health deteriorated rapidly and she was often in pain with gout and other troubles.

Oh, and there were no actual rabbits in Queen Anne’s quarters, either

Previous Post
A Drastic Change in the British Monarchy Led to Two Major Rebellions
Read More
Next Post
Queen Anne, last of the Stuarts, told a tale about a warming pan and changed the course of history
Read More
Subscribe
0 Comments
Inline Feedbacks
View all comments